How Vitamin C Supports with Cancer Therapy | When in ABQ 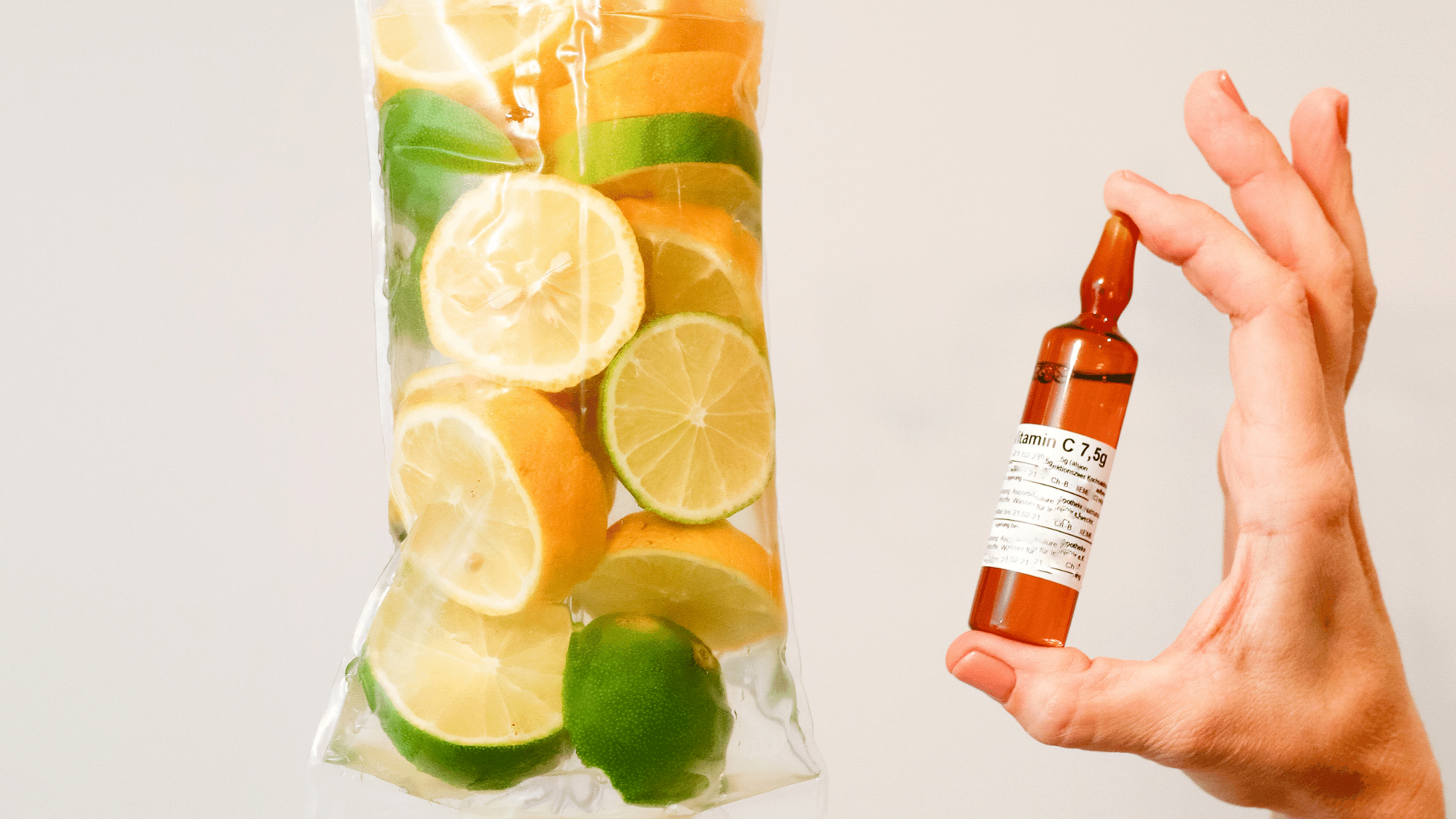 Albuquerque, NM -- Vitamin C works as an adjunct cancer therapy. Oral or intravenous has its pros and cons. Find out which one’s better for you

Vitamin C is highly marketed and endorsed because of its multiple uses. It is best known for its function in strengthening the immune system, increasing collagen production, and as an antioxidant.

The discovery of Vitamin C is one of the biggest milestones in the history of improving human nutrition. Today, Vitamin C has become an immensely popular dietary supplement, however, it is still important to note that there are still a lot of people who are Vitamin C deficient.

Vitamin C is an essential micronutrient that plays an important role in numerous physiological processes in the human body. Tthe human body cannot synthesize Vitamin C, hence it must be obtained through dietary intake.

The use of vitamin C infusions is not new. In fact, way back in the 1970s, Nobel Prize winner Linus Pauling was already using high doses of oral vitamin C supplementation in patients with advanced cancer. However, it was met with criticism with regards to data collection and analysis.

Vitamin C is a proven indispensable nutrient that is beneficial to everyone. Here at The Injection and Infusion Clinic of ABQ, we give you access to high-dose Vitamin C infusions coupled with quality patient care to give you just what you need.

Uses and Functions of Vitamin C

Vitamin C is essential for the biosynthesis of collagen, L-carnitine, and several neurotransmitters. Vitamin C is also involved in protein metabolism.

Its role in collagen synthesis making it a very vital component for wound healing. Vitamin C is also a crucial physiological antioxidant which is necessary to give rise to other antioxidants such as tocopherol.

Here are the basic functions of Vitamin C:

How Much Vitamin C Do We Need

The recommended dietary intake for oral Vitamin C is 75-90 milligrams but research shows that to achieve health results, a minimum of 500 milligrams per day is the ideal dose. The safer upper limit is 2000mg orally.

However, several studies have shown that high dose concentrations of Vitamin C given via infusions may be therapeutic for some illnesses, including cancer.

Most drugs have significantly higher bioavailability when delivered via the intravenous route as opposed to the oral route. This is because all oral medicines and supplements undergo first pass metabolism (also defined as the significant reduction of the concentration of a drug before it reaches the systemic circulation), hence resulting in decreased bioavailability in the end.

The same is true with Vitamin C, however a different mechanism was noted to regulate bioavailability.

Studies have shown that with oral supplementation higher than 250mg/ day, Vitamin C bioavailability levels reach a saturation plateau, due to a coordinated action of multiple mechanisms.

Though high dose Vitamin C therapy is generally tolerable and safe, with excess amounts excreted through urine, there are some adverse effects that a patient may experience once on therapy:

Vitamin C has been studied extensively for cancer. Pharmacokinetic studies have shown that the route of administration of Vitamin C (oral supplementation versus intravenous infusion) in cancer patients makes a big difference.Even in the absence of sufficient and reliable clinical trial data, Vitamin C still sparks interest among researchers and physicians for its potential as an aid in cancer therapy. Its high safety profile makes it incredibly attractive for cancer treatment.Daily Vitamin C supplementation through the oral route was noted through research to likely reduce the incidence of gastric, esophageal, oral, pharyngeal, and cervical cancer. Numerous reports have shown that high doses of Vitamin C given as an adjunct to conventional chemotherapy drugs enhance the effect of these drugs in inhibiting cancer cell growth.Vitamin C is known widely as an antioxidant, however infusions for cancer are generally given in high doses, promoting its pro-oxidant function. Pro-oxidant function simply refers to the capability of Vitamin C to illicit cell death in cancer cells without adversely affecting normal cells.Other than the known complications of intravenous Vitamin C in those with renal impairment or glucose 6 phosphate dehydrogenase deficiency, high dose intravenous vitamin C appears to be remarkably safe.High-dose intravenous Vitamin C has been shown to significantly prolong the survival of patients and it has been used for decades as a complementary, alternative, and adjuvant medicine in clinics.

In patients with colon cancer, it was subsequently noted that high doses of Vitamin C increased the efficacy of chemotherapeutic drugs, resulting to lower dosages of oxaliplatin and irinotecan.Oral Vitamin C was given as part of an antioxidant therapy for a study involving patients with ovarian cancer. In addition to oral antioxidant therapy, the patients were also given intravenous Vitamin C. Normalization of CA-125 levels were noted as early as after the first cycle of chemotherapy.In a review conducted on nine cases of cancer with differing stages, the regular administration of large doses (25 – 100 grams per day) of intravenous Vitamin C was documented. Deterioration in clinical condition upon withdrawal of Vitamin C therapy was noted, as well as survival beyond prognosis and improvement in quality of life among those who continued therapy.Safe co-administration with and improved tolerance towards conventional chemotherapy were also noted. In another study involving 14 patients undergoing chemotherapy for cancer, it was observed that intravenous Vitamin C was generally well-tolerated, despite transient adverse effects during and after the infusions.Pharmacokinetic profiles for pre-and post-chemotherapy suggested that tissue uptake of Vitamin C increases after chemotherapy, with no concomitant increase in urinary oxalic acid excretion. Three patients with different types of cancer reported unexpected transient stable disease and a better quality of life attributed to increased energy and functionality.Another clinical trial involving patients with ovarian cancer randomized patients to receive Vitamin C or standard chemotherapy.Results showed an 8.75 month increase in progression-free survival - an improved trend in overall survival in those receiving Vitamin C intravenously.Though these results need to be replicated and verified further, current information of the effect of Vitamin C infusions on cancer patients are already noteworthy and promising.The practical information that most research provided could be used to direct future clinical trials to objectively determine the effect of Vitamin C infusions on specific cancer types at specific dosages

In several mouse models, intravenous Vitamin C was already noted to have a synergistic effect on chemotherapy for pancreatic cancer, giving clinical promise. Clinical trials on patients with advanced pancreatic adenocarcinoma, a dosing of 15 to 125g twice weekly along with the drug gemcitabine resulted to a mean survival time of 13 ± 2 months.Patients with stage III / IV ovarian cancer were given 75 to 100 g of intravenous Vitamin C twice weekly for 12 months, resulting to an 8.75 month increase in progression-free survival.In another trial involving patients having various cancer types (lung, rectum, colon, bladder, ovary, cervix, tonsil, breast, biliary tract), a different way of dosing and treatment was applied.An infusion equal to 1.5g/kg body weight was infused three times (with at least one day apart) on weekdays during weeks when chemotherapy was administered (but infusion is not given on the same day as IV chemotherapy), and any two days with at least one day apart during weeks when there was no chemotherapy given. Significant improvement in energy and functionality was noted.Patients with glioblastoma received 15-125g of intravenous Vitamin C three times a week for seven weeks during the radiation phase, and two times a week during the adjuvant phase. This resulted to a progression-free survival of 13.3 months and an average overall survival of 21.5 months.In advanced stage non-small cell lung cancer, two 75g Vitamin C infusions were given weekly up to four cycles. Results noted stable response in most patients, with disease progression in only 1 out of 14 patients receiving therapy.

Intravenous Vitamin C has been proposed as an unconventional treatment for different types of cancers since the 1950s. Studies have proven that Vitamin C is indeed promising as an adjunct therapy to chemotherapy.There is a better outcome for cancer patients who opt to go for Vitamin C infusions compared to oral supplementation with Vitamin C. It was noted that intravenous Vitamin C reduces tumor size, improves overall quality of life, and has a synergistic effect on chemotherapy. Aside from that, it mitigates the adverse effects associated with chemotherapy.Experience these effects and start by booking an appointment with The Injection and Infusion Clinic of ABQ today. This just might be the answer you need for you or your loved ones seeking a better quality of life despite the threat of the big C.Help yourself or someone you love by offering the promise of a bigger C – Vitamin C infusions.